What I Learned About Driving – and the Law – in Italy

By: Donald B. Johnston 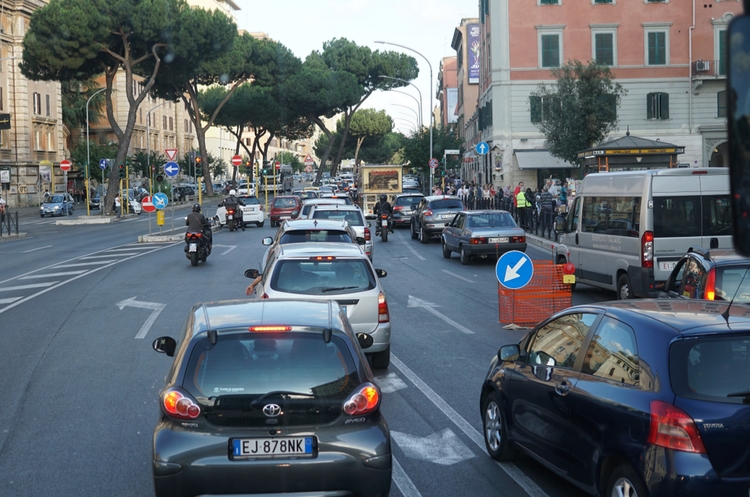 I had the privilege recently to travel to Italy and to spend some time in Rome and the surrounding countryside. It was certainly beautiful, all of it, and I had the feeling, especially in Rome, that I was walking on history.

I saw the place where Big Julie got it (right in the rotunda – ouch!). It’s now a cat sanctuary.

The Colosseum was great too, especially when lit up at night. According to Wikipedia construction on the Colosseum started about 70AD.

The Pantheon is breathtaking. According to Wikipedia, construction on the Pantheon started about 126AD. Obviously different contractors than the guys who worked on the Colosseum. It still has the world’s largest unreinforced concrete dome.

But you can say what you like about the Colosseum, the Pantheon, the Trevi Fountain, the Forum, the Spanish Steps and other wonderful tourist sites, the most impressive thing about Rome is its drivers. Roman drivers are balletic. They are to traffic what Leonardo da Vinci was to painting and sculpture. They are indeed artists of the most refined sort. That’s what I really want to talk about in this blog – the rules of the road in Rome.

As a lawyer, I have been trained to respect rules. It’s in our blood. Even as we are trying to work around them, we still have a healthy respect for them. However, I learned a lot about rules by driving in Rome. The rules of driving in Rome changed my views and philosophy and gave me tremendous respect for the Italian driver.

Here’s some of what I learned:

1.         There are two sets of driving rules. The first set is the “official” set. Mostly, no one worries about these. They are regarded as mere suggestions. However, they do sometimes apply under the following circumstances: (i) when there are no “unofficial” rules to supplant them; or (ii) when one is being observed by the Carabinieri1 or the Polizia di Stato2. If there are no members of the Carabinieri or Polizia di Stato on hand, any Italian driver will be happy to tell you what the rules are from the window of his car. Even if you don’t ask. They are very accommodating and helpful that way. I even witnessed a driver who got out of his vehicle on the very busy Circonvallazione Tiburtina to assist another driver (who was obviously hard of hearing) to understand the rules of the road. Seeing such generous sharing of knowledge on that occasion brought a tear to my eye. It is rare to see the milk of human kindness flowing to such an extent. Such filial affection could only have come from one Italian driver to another.

2.         Never use your turn signals. First, it’s no one’s business where you are going.3 Second, you always have the right to change your mind about what lane you are in – if, indeed, you are in any actual lane. So why mislead other drivers? Keep your intentions to yourself, and everyone will be better off. Everyone can just weave in and out of the available lanes and traffic will flow like wine as a result.

3.         Never use one lane when you can use two. This is a corollary of rule 2, above. It misleads other drivers if you stay in your own lane, because (as mentioned) you always have the right to change your mind about what lane you are in. If you stay in one lane, other drivers are apt to think that you intend to stay in that lane, when that is absolutely never the case. It is highly improper to mislead other drivers in this way. So remember: using two lanes is always better than using one.4

4.         The posted speed limit is irrelevant.5 The official speed limit in Rome is 50 km/hour. No one ever drives that speed. It is considered impolite. If you can go faster, you should, because you are holding up everyone behind you. If you are forced to go slower than 50 km/hour, make sure that you look like you are doing your best to go faster. Take note, however, that there are speed cameras all over the place. You should always wear a smile, so that you will look your best on camera.

6.         Scooters are king. Everywhere throughout Rome you will see motor scooters. Roman drivers generally try to avoid hitting them, but there is apparently no penalty for doing so. It is very important, while driving a scooter, to behave as though you own the road. Expensive sun-glasses and fancy leather gloves will help with this look. So will an expensive Italian suit. Car drivers will sense, the way wild animals sense fear, if you are uncertain or lacking in confidence, and you won’t last long. When you park your scooter, observe the rule of the Serengeti – cluster together with other scooters, and definitely DO NOT PARK on the pavement. You have to park on the sidewalk in order to get in the way of the maximum number of pedestrians.

7.         Religion is important. While traveling in taxis in Rome, I learned that the taxi drivers there are all extremely religious. I’m not sure why this is the case, but every taxi driver seems constantly to mutter prayers and invocations to the Almighty. Sometimes, especially if it is a fine day, they will open the windows of their vehicles and shout praises or, often, lamentations, to their Creator. It is a moving experience that is likely to promote your own belief in the Afterlife. In fact, Roman taxi drivers may even see to it that you get to experience the Afterlife sooner than you might expect. Wonderful!

The upshot of what I learned is this: Italians are absolutely law-abiding drivers. However, the laws that they obey are not written in any book of regulations. They are written in the mind of every Italian driver and are rigorously enforced as much as any law in any country. I am indebted to them for teaching me this and, indeed, for changing my entire philosophy of the law.

1 The Carabinieri are Italy’s general police force. They look very sharp in their paramilitary uniforms. They have nice guns, which they will be happy to show you the pointy end of.

2 The Polizio di Stato seem to be in charge of highway traffic and drinking coffee.

3 The Italians are very big on privacy that way and have banished the turn signal on the ground that it is a breach of the European General Data Protection Regulation. These drivers have taken the Rule of Law to the next level, without a doubt.

4 I read in a tourist pamphlet in my hotel that a driver was once able to use three lanes at a time. There is now a statue of him in the Piazza Navona, and he is regarded as a national hero – indeed, almost as a saint.

5 Unless the Carabinieri or Polizia di Stato are looking. See above.