Your Song Was Handmade For Somebody Like Me: Court Clears Ed Sheeran of Copyright Infringement in Shape of You

In 2017, Ed Sheeran’s Shape of You was the biggest song in the world. It was the No. 1 song on the Canadian Hot 100 for 16 weeks, a record only surpassed by Lil Nas X’s Old Town Road in 2019. Shape of You has since amassed more than 3-billion streams on Spotify and 5.6-billion views on YouTube. It’s a catchy pop-dance track with Caribbean vibes and an R&B feel. The song is about the thrill of a first date, a new flame and the discovery of carnal delights.

Sami Chokri (who performs under the stage name Sami Switch) accused Sheeran of copying a two-bar phrase from his song Oh Why in Shape of You. Chokri notified the Performing Rights Society of his possible songwriting claim to Shape of You, prompting the Society to withhold royalty payments to Sheeran and the other credited songwriters (amounting to £2,200,000, approximately C$3.6-million).

Sheeran, along with the other Shape of You songwriters, brought a claim in the High Court of Justice in London, England, seeking a declaration that they did not infringe Chokri’s copyright in Oh Why. Acknowledging the importance of songwriters being able to clear their names from accusations of deliberate copying, the Court granted the sought declaration in a ruling on April 6, 2022.

While there has been push and pull in the courts through these stolen song suits, Sheeran v. Chokri, [2022] EWHC 827 (Ch) appears to be part of a new line of cases (see Stairway to Heaven and Dark Horse) that set a high bar for making out a case for copyright infringement, based on similar short phrases from relatively obscure sources.

Let’s Not Talk Too Much – Sheeran’s Earlier Copyright Imbroglios:  No Scrubs, Amazing and It Wasn’t Me

Sheeran went into the litigation in an awkward position. He was already facing multiple accusations of plagiarism in his songs.

Shape of You and No Scrubs

An earlier draft of Shape of You contained a deliberate reference to TLC’s hit No Scrubs. Sheeran’s manager approached Sony Music Publishing to discuss obtaining clearance for the use. Sheeran ultimately changed his mind and revised the melody to remove the No Scrubs reference.

Upon release of Shape of You, Sony’s lawyers asserted that the revised version was too similar to No Scrubs. In particular, the phrase “Boy, let’s not talk too much” in Shape of You had an eerie similarity to “No, I don’t want no scrub” in No Scrubs:

Ultimately, Sheeran agreed to share writing credit with the No Scrubs writers and obtained clearance.

In 2012, Sheeran faced a similar accusation that his hit Photograph copied the chorus of Amazing (as recorded by Matt Cardle and released a few months earlier). 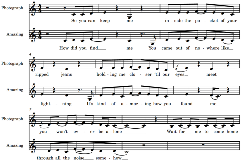 The writers of Amazing brought a lawsuit in the U.S., which ultimately settled, and the claimants received 35 per cent of the publishing income from Photograph.

Strip That Down and It Wasn’t Me

Sheeran also had an unintentional copying allegation against Strip That Down (performed by Liam Payne, but co-written by Sheeran) with Shaggy’s It Wasn’t Me. Sheeran sought and obtained clearance for use of It Wasn’t Me after Strip That Down was written, but before it was released.

Come On Now, Follow My Lead – Chokri Alleges Infringement of Oh Why

Following on the earlier copying allegations against Sheeran, Chokri sought to paint a picture of Ed Sheeran as a “magpie” who copies other people’s work and takes credit for it. Unlike the previous three copying allegations, Sheeran decided to fight this one.

The Court directed itself to the standard test for non-literal infringement claims:  there must be

The extent of the similarities combined with the extent of the alleged infringer’s access to the original work must raise a sufficient possibility of copying. If there are stronger similarities, especially with unique or intricate elements, less evidence on access may be necessary.

Chokri’s infringement claim concerned a two-bar phrase in the songs:

When the songs are transposed to the same key, there are a few obvious similarities:

However, these passages also have key differences:

The fundamental problem with Chokri’s copying allegation was that the elements that were similar were generic and not identical — similar lyrics, similar rhythm, similar notes, similar melodic structure. Even combined, there simply are insufficient similarities between the unique musical elements to give rise to a copyright infringement claim.

Whereas Shape of You and Sheeran garnered worldwide fame, Chokri and Oh Why were relatively unknown. Chokri was not signed with any major record label. Oh Why had played on the radio only twice. Chokri performed the song twice to venues that held at most 200 people. Oh Why had only 12,914 views on YouTube around the time Ed Sheeran wrote Shape of You.

The internet is wide, and tens of thousands of new songs are uploaded everyday. The Court held that it would not be sufficient to show that a work was publicly accessible. It would not be sufficient to show that Sheeran was actively seeking to discover new music in the U.K. music scene — in fact, the evidence shows that Sheeran took a year-long sabbatical from social media and music around the time of Oh Why’s release. There must be actual evidence that Shape of You songwriters accessed the work.

The Court gave no credence to the past allegations and settlements. While the U.K. Court refrained from commenting on U.S. law, its opinion was that “there are insufficient similarities between them to demonstrate that Shape continued to include a substantial part of No Scrubs” and rejected “the contention that Mr Sheeran deliberately copied Amazing when co-writing Photograph with Mr McDaid.”

Sheeran intentionally copied part of No Scrubs in an earlier version of Shape of You and then modified it to remove the copied elements. If it would not be infringement to knowingly copy a musical phrase, then modify it to remove the distinguishing elements, the bar for establishing non-literal infringement of musical works is evidently very high.

Without any strong similarities with protected elements in Oh Why and no convincing evidence that Sheeran would ever have heard Oh Why, Chokri’s infringement claim was untenable.

The decision is a much-needed breath of fresh air for songwriters. Had Chokri been successful, it would have meant songwriters could be pursued over a couple of bars with choral Oh’s and Ah’s on a generic steady ascending eighth-note scale. As the Shape of You songwriters candidly admitted, there was nothing original about this in Shape of You, and neither is there anything original in Oh Why. The basic musical ideas of Western music ought to be free for anyone to use.

For Sheeran, this was a matter of clearing his name and proving that he was an original songwriter. In a statement published on Twitter, Sheeran expressed his thoughts on the proliferation of stolen song suits:

“There are only so many notes and very few chords used in pop music. Coincidence is bound to happen if 60,000 songs are being released every day on Spotify — that’s 22-million songs a year, and there’s only 12 notes that are available.  …  Hopefully we can all get back to writing songs rather than having to prove that we can write them.”

1 The Court’s full musical analysis comparing the songs and the history of the creation of Shape of You is at paras 30–77 of the judgment.