The Imminent Arrival of File Wrapper Estoppel in Canada 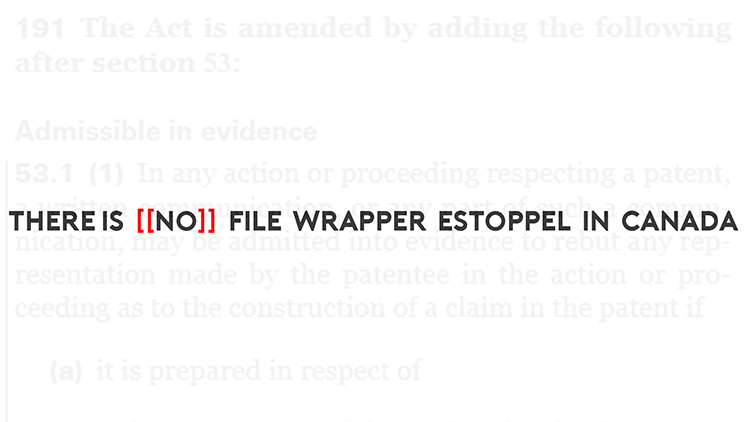 For the best part of 18 years, since the judgment of Justice Ian Binnie in Free World Trust, 2000 SCC 66, it has been well-settled law that there is no file wrapper estoppel in Canada. That’s all about to change following Bill C-86, which was introduced on October 29, 2018.

File wrapper estoppel is a term used in the United States to describe the use of the prosecution history as recorded in the file at the Patent Office to constrain the interpretation that may be later placed on patent claims. The applicant is prevented from later claiming, e.g. in a patent dispute, that statements made during the application process meant something different, or “estopped” from presenting a claim construction that contradicts his/her previous submissions to the Patent Office during prosecution.

Here is a brief history of what led to the imminent arrival of file wrapper estoppel in Canada.

2000:   The rule against using the file wrapper to construe the claims of a patent was established by the Supreme Court of Canada in Free World Trust, which held that the use of such ‘extrinsic evidence’ would increase uncertainty and undermine the public notice function of the claims.

2013:   In Distrimedic inc. v. Dispill Inc., 2013 FC 1043, Justice de Montigny ruled that the prosecution file history was not admissible to interpret patent claims, but noted that the Court does draw “an inference” from an amendment made to the claims during prosecution.

2016:   In Pollard Banknote Limited v. Babn Technologies Corp., 2016 FC 883, Justice Locke questioned whether file wrapper estoppel for claim construction should be allowed, but re-affirmed the conventional view that the prosecution history of a patent or ‘file wrapper’ is irrelevant to claim construction in Canada.

2018:   Bill C-86, the Budget Implementation Act, tabled in the House of Commons on October 29, 2018, contains proposed amendments to the Patent Act which include the introduction of file wrapper estoppel in Canada. The transitional provisions of Bill C-86 state that the new rule would apply to any “action or proceeding that has not been finally disposed of” when the section comes into force, likely in late 2019.

Practice Note: For most Canadian practitioners, it has always been good practice to be careful about the amendments and statements made during prosecution, since they could be used in the United States to restrict the ability to argue for a broad claim construction in subsequent litigation. Now that file wrapper estoppel is indeed coming to Canada, practitioners will need to be hyper-aware of their words.