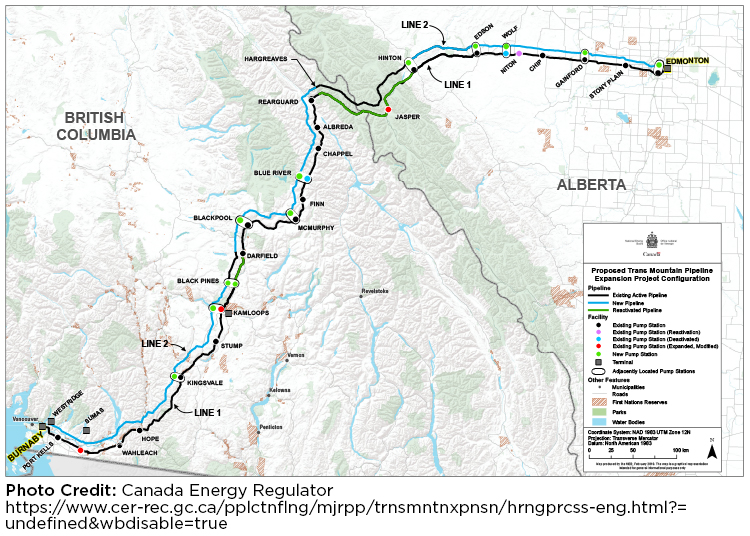 The Trans Mountain pipeline has been a divisive issue in Canada long before the Liberal government decided to purchase it in 2018. However, since the government purchased it, there have been ongoing legal challenges to the government’s decision to approve the pipeline expansion. This culminated with the Federal Court of Appeal quashing the Cabinet’s approval of the pipeline in Tsleil-Waututh Nation et al. v. Attorney General of Canada et al. (Tsleil-Waututh Nation) on August 30, 2018. The Court cited the National Energy Board’s (NEB) underdeveloped assessment of the environmental concerns regarding project-related marine shipping and the Crown’s inadequate consultation with Indigenous peoples to determine that the original approval decision was unreasonable. As such, the Court of Appeal quashed the initial approval of the pipeline project. We detailed the case in a previous article.

After the Tsleil-Waututh Nation decision, Canada sought to approve the pipeline expansion project again. On June 18, 2019, the Governor in Council approved the Trans Mountain Expansion Project, with the NEB’s Certificate and Amended Certificates issued to Trans Mountain Pipeline ULC following shortly after.

To get to the June 2019 approval, Canada, as directed by the Federal Court of Appeal in Tsleil-Waututh Nation, referred project-related marine shipping back to the NEB for a more exhaustive analysis. The NEB issued its reconsideration report on February 22, 2019, recommending a series of safeguards, such as a regional cumulative effects management plan, public reporting, a marine bird monitoring and protection program, and an Offset Program to address the increased underwater noise and potential harm to at-risk marine mammal and fish species. Throughout this, Canada reinitiated the consultation process with potentially-affected Indigenous peoples. Canada believes that it has fulfilled all necessary requisite obligations for the pipeline to proceed.

However, some groups do not think Canada did enough. As noted above, 12 different parties filed applications for judicial review to the Federal Court of Appeal. These 12 parties relied on s. 55 of the National Energy Board Act to seek leave to commence judicial review of the Governor in Council’s decision to reapprove the pipeline. The ultimate goal of these judicial review applications is the same as the Tsleil-Waututh Nation decision: to convince the Court the Governor in Council’s decision was unreasonable, requiring the Court of Appeal to again quash it.

This led to the Raincoast Conservation decision in which Stratas J.A. granted leave for six of those applications to proceed to judicial review. The six parties that were granted leave are all First Nations who are trying to halt the project. Stratas J.A. noted that the judicial review will be limited to the Crown’s duty to consult with Indigenous peoples and whether this round of consultation was adequate. Indigenous consultation, according to Stratas J.A., was the only issue that meets the ‘fairly arguable’ standard for leave. As such, Stratas J.A. narrowed the issues into two primary questions (excluding remedies):

Stratas J.A. held that the Court is only interested in whether the Crown adequately consulted Indigenous peoples in this time.

Of the six applications that Stratas J.A. denied, two of them were from First Nations, the Stz’uminus First Nation and the Shxw’ōwhámel First Nation. Stratas J.A. noted that both nations raised already settled issues, which would be inappropriate to relitigate. Similarly, the other four applicants, three of which are ecological groups and the other is the City of Vancouver, were all denied leave because their basis for judicial review did not properly appreciate the Governor in Council’s wide discretion to evaluate environmental concerns against other factors. In fact, Stratas J.A. held that it was clear from the Governor in Council’s decision that it found compelling public interests that outweighed the environmental concerns.

Adding further complexity to the case, the Government of Alberta acted as an intervener when the Government of Canada decided not to oppose the leave motions. The Alberta Attorney General opposed the motions, while defending the expansion project.

While the September 4, 2019 decision granted leave for six applications for judicial review of the Governor in Council’s decision to proceed, the Federal Court of Appeal did not issue an interlocutory injunction that would prevent the Trans Mountain Corporation from further planning or constructing the project. However, Stratas J.A. prescribed short and strict deadlines for litigation, requiring the parties to file notices of application for judicial review within seven days of the decision. In the near future, the Federal Court of Appeal should hear the full arguments from the six First Nations in their respective judicial review applications and the Government of Canada’s defence to determine whether this time the approval was reasonable.

In the meantime, the Trans Mountain Corporation will continue planning and begin construction. In this regard, the project proponent has stated that “[t]he [judicial review] applications are challenging the decisions made by the Canada Energy Regulator and the Federal Government, but do not in and of themselves negate the pre-existing approvals provided by those governmental authorities until and unless the court rules otherwise.”