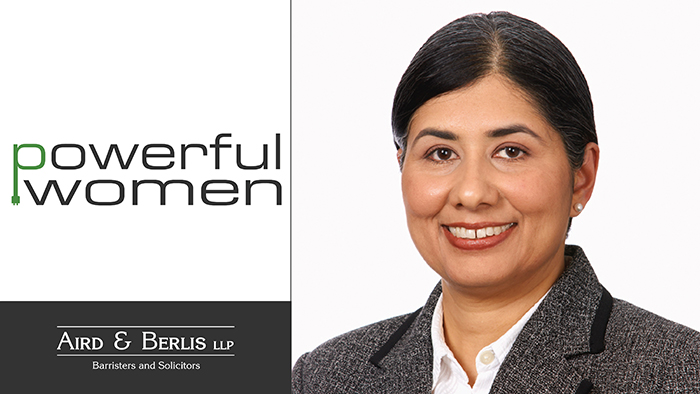 This weeks' contributor to our Powerful Women series is Malini Giridhar, Vice President of Market Development and Public and Government Affairs, Enbridge Natural Gas Distribution Inc. We were delighted to speak to Malini about her extensive experience in the natural gas sector and her work developing future leaders as the former Executive Sponsor for Women@Enbridge. The following is an edited and condensed version of our interview.

How did you get involved in the energy sector?

I got involved in the energy sector almost by chance. I originally intended to pursue an academic path in economics. I grew up in India and after I married, my husband and I decided to move to Australia. Due to delays in funding, I wasn't able to immediately continue my academic pursuits when I arrived there. Instead, I looked for work and found a position as an energy rates analyst in Melbourne. I just happened to come across the position and I found that I loved it. At that time, the sector was experiencing a lot of change. Australia was undertaking the deregulation of its gas sector and looking to Canada as a model for that process.

After a few years, we moved to Canada. I thought about going back to the core economic work I had been studying, but when I arrived in Canada, it was the middle of a recession and banks were laying off economists. I looked again to the energy sector and was able to secure a position. I worked initially for Energy Probe as a consultant and then started my career with Enbridge. I started as a financial analyst and held progressively more senior positions in the Regulatory and Gas Supply groups. In June of this year, I was appointed as the Vice President of Market Development and Public and Government Affairs.

What do you see as the key challenges facing Enbridge and/or Ontario's energy sector today and going forward?

In Ontario, Enbridge has had a solid business through its gas distribution business unit. It provides a competitively priced product - natural gas that is safe, reliable for over 2 million Ontario residences and businesses. But climate change policy is poised to impact the natural gas sector in the province. In Ontario, where you have low carbon electricity, carbon emissions from natural gas used to heat buildings is a target. The government is clear in its desire to reduce demand for natural gas heating, emphasizing new but very expensive solutions for heating, including geothermal and solar. Enbridge's future growth is not necessarily assured through our traditional means of providing building heat. We're going to have to find another way of growing in an environment where fossil fuel use is discouraged, but customers need affordable energy.

I don't want to engage in any gender stereotyping, but I see that women often possess certain strengths that haven't always been valued in the workplace. Women bring diversity of thought. In terms of my own style, I feel that I've made a difference in difficult negotiations because I am able to listen. I think women are able to acknowledge differing points of view which is the first step of really listening. I can't conclude that all women have that skill set, but in my experience, many do. If nothing else, gender diversity where there hasn't traditionally been any brings a fresh perspective. And a fresh perspective is critical in times of change, like that facing the natural gas sector in Ontario.

In terms of women and their advancement, I led the Women@Enbridge program for a number of years and I observed two things that hold women back. The first is that women need visibility to succeed in the workplace. Often, we don't strive for positions that have that visibility. We need to be more strategic in terms of the positions that we aspire to and look for roles that have influence and the power to make change. The second is that I think by nature many women are uncomfortable speaking with confidence about what they bring to the table. We want to be discovered rather than tell people about our skills and what we can contribute. It does not have to be self-promotion, but women must be able to identify needs in an organization and then say how they can help meet those needs.

Of course, there are larger organizational issues as well. An organization needs to ensure that it has a strong pipeline of women candidates for leadership roles. In my own company, it is very strong in some areas and weak in others. For example, you don't find a lot of senior women in the engineering group as it has been a fairly male dominated sector. As an organization, we need to monitor the pipeline for candidates in all functions and do the work to retain and develop talented women.

What advice do you have for a woman starting her career in the energy sector?

It is important to think about your career path right from the start of your career. You don't need to identify every position from the outset that you will hold in the course of your career. But you should have an idea of the path that you are interested in pursuing and then think logically about the next few steps along that path. As I said, I came upon this career by chance, but once in the industry, I was always thinking ahead to what my next two jobs would be. I was asking myself, "Can I do my boss's job? What will it take to get to the next level? What skills and experience do I need?"

Keep an open mind, make a flexible but deliberate plan and pursue it. And along the way, make sure to seek out the advice of women and men to help you with your career.