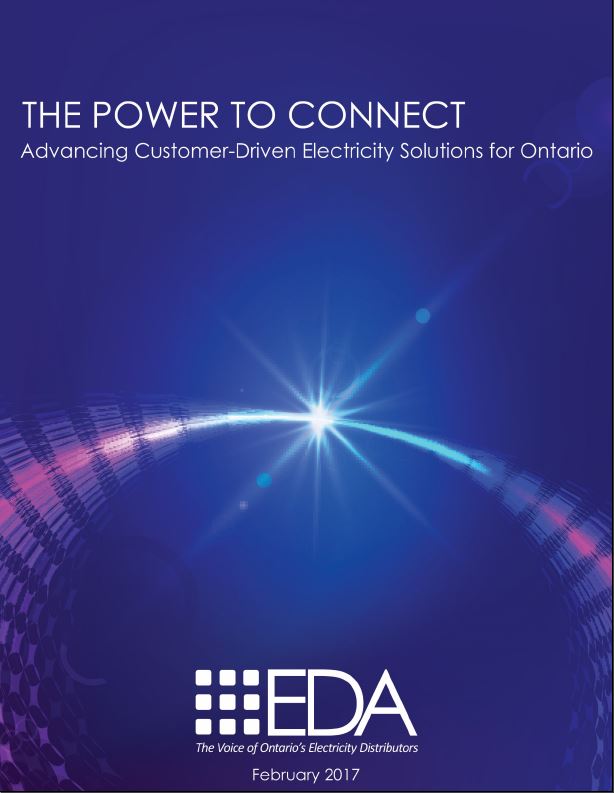 The Ontario Electricity Distributors Association (EDA) recently released a Report titled The Power to Connect: Advancing Customer-Driven Electricity Solutions for Ontario. The Report highlights how distributed energy resources (DERs) can support a more resilient and cost-effective electricity system. In both the Report (which was prepared by Navigant Consulting) and the related Overview (prepared by the EDA), there is a strong focus on the reasons why Ontario's local electricity distributors (LDCs) are best positioned to ensure the efficient development of DERs.

As explained in the Overview, DERs are small-scale power sources (usually in the range of 3kW to 50 kW) located close to where electricity is used. DERs are known by different names such as generators, back-up generators or on-site power systems, and also include associated storage technology. According to the EDA, DERs will factor more prominently in power generation, distribution and management. By their nature, they will offer significant potential for new technologies to support grid modernization, micro grids, more energy storage and improved conservation efforts. DERs will be important contributors to adding low-carbon electricity to the system.

Both Navigant and the EDA write about the importance of the LDCs' role in supporting DERs. Clearly, LDCs need to be able to accommodate the connection of third party DERs to the distribution system. Beyond that, however, the argument is made that LDCs are uniquely positioned to be the developers and owners of DERs because of system expertise and customer relationships and investment advantages.

The authors recognize that there are barriers and challenges to this evolution under the current LDC model. As set out in the Overview, "a more flexible regulatory environment will be essential for LDCs to keep up-to-date with rapidly evolving market conditions, while ensuring public and worker safety and customer reliability and responsiveness." In the Report, Navigant explains the potential issues with LDCs seeking to include DERs in their regulated operations (rate base), and sets out some ideas about how these can be overcome. Navigant also recommends that the current regulatory framework should be updated to reward LDCs that enhance their systems to enable third party DERs.

The Overview (and the Report) concludes with a discussion of the EDA's recommended "next steps ... to begin the discussion on necessary policy development and implementation that would best suit the needs of Ontario." An early step is engagement with the Minister of Energy to ensure that the Long Term Energy Plan confirms the key role of LDCs in supporting a cleaner, more distributed and more intelligent grid through the implementation of DERs. In the coming years, the EDA recommends creating a working group to "investigate an alternative regulatory framework that would incentivize LDCs to integrate DERs" and working with the Ontario Energy Board to develop a process that will monitor the responsiveness of the regulatory framework to the energy grid transformation where doing so brings economic and/or system efficiencies.

It will be interesting to see how the EDA's initiatives proceed. Presumably, guidance will be taken from other jurisdictions, including New York State where its Independent System Operator has now released its Distributed Energy Resource Roadmap. That Report is intended to support building and transitioning to a grid of the future that is diverse and bi-directional.