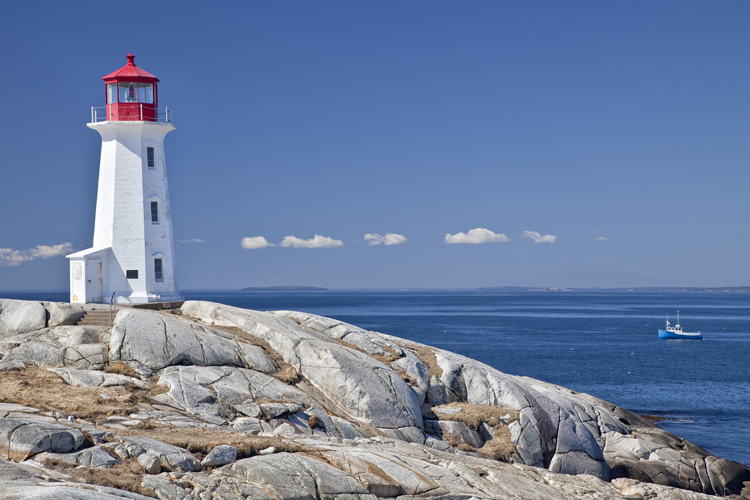 Nova Scotia Power customers are months away from receiving electricity generated from the Bay of Fundy's renowned tides. After several years of research, design and trial and error, a group led by Ireland-based OpenHydro, together with Nova Scotia Power affiliate Emera, will deploy a fully grid-connected 4MW tidal array by the end of 2015. This multi-megawatt interconnected tidal turbine project is expected to be the first of its kind in the world and will provide electricity for more than 1,000 customers in Nova Scotia.

Tidal Energy Generation in the Bay of Fundy

The Bay of Fundy is uniquely suited for tidal energy generation. It has the world's highest tides with a vertical range 16 m. The Minas Basin and Minas Passage are particularly well suited for tidal energy generation. Minas Basin, which forms the eastern part of the Bay of Fundy, is connected to the bay by Minas Passage, a small channel 5 km wide and 15 km long. Billions of tonnes of water flow through Minas Passage at each turn of the tide reaching speeds in excess of 18 km/hr. As a result of these conditions, Minas Passage was selected as the site of the Fundy Ocean Research Centre for Energy (FORCE). FORCE is a test centre for in-stream tidal energy generation technology to study the potential for tidal turbines within the Bay of Fundy. FORCE was established in 2009 with federal and provincial funding, as well as support from Encana Corporation and participating developers. Researchers have calculated that power in the range of 2000 MW could be safely extracted from Minas Passage by an array of in-stream tidal turbines.

The idea of generating energy from the power of the Bay of Fundy tides is not new. In 1984, North America's first and only tidal generating station opened at the foot of the Annapolis River in Nova Scotia. The Annapolis Tidal Station has a capacity of 20 MW and makes use of technology similar to that of a conventional hydro-electric dam. This tidal power technology is known as a barrage.

A tidal barrage is essentially a dam across the width of a tidal estuary and it makes use of the potential energy in the difference in the height between high and low tides. Sluice gates in the barrage are left open as the tide rises, allowing the estuary basin water levels to rise. At high tide, the sluice gates are closed and the water is held back for several hours while the tide ebbs and the sea level drops. The gates leading to the turbine channels are then opened and the water flows through the turbines generating power. The process is repeated with each turn of the tides.

The barrage model of tidal power technology has not been adopted on a significant scale. Construction of the barrage is costly and, as with any large hydro-electric dam, the prospect of its construction raises numerous environmental concerns. One of the most significant limitations of this technology is the lack of viable sites. Currently, barrage tidal generation facilities only operate in France, Korea and Russia.

In-stream tidal turbines make use of the kinetic energy of moving water to power turbines in a manner similar to wind turbines.  Unlike tidal barrages, tidal turbine technology is removable; it can be scaled up gradually and has lower potential construction costs and environmental impacts.

There are a wide variety of turbine designs. The OpenHydro project will consist of two 16 m commercial scale open-centre turbines with a capacity of 2 MW. Each turbine is mounted on a subsea gravity base and is connected via underwater cables to an onshore substation which is connected to Nova Scotia Power's transmission grid. The OpenHydro project is one of four planned for the FORCE site in the coming years.

In 2012, the Province of Nova Scotia published its Marine Renewable Energy Strategy aimed at establishing Nova Scotia as "a global leader in the development of technology and systems that produce environmentally sustainable, competitively priced electricity from the ocean."[1] Tidal energy generation is the primary focus of the strategy, although it also contemplates development of offshore wind and wave power. Part of the Marine Renewable Energy Strategy was the creation of a feed-in tariff for tidal generation projects with a capacity of more than 500 kW.[2] In May 2013, the Nova Scotia Utility and Review Board approved the Developmental Tidal Energy Feed-in Tariff. The FIT rates range from $0.375 per kWh to $0.575 per kWh for a term of 15 years.[3] The Province indicated it would limit the total impact of the Developmental Tidal Energy FIT by setting a cap on the energy to be licensed to ensure that customers' electricity bills would not rise by more than 2%.[4]

On April 29, 2015, the Province of Nova Scotia introduced the Marine Renewable Energy Act to implement its Marine Renewable Energy Strategy and the development of marine renewable energy resources, including waves, tidal range, in-stream tidal, ocean currents and offshore wind, in designated areas. The Act will establish a licensing and permitting regime for the development of marine renewable energy generation. Last month the Nova Scotia Utility and Review Board approved the standard form of power purchase agreement for in-stream tidal array projects.

The economic benefits of developing tidal generation are expected to be felt throughout the region. OpenHydro estimates that its project will create 950 direct and indirect jobs. As well, during the first round of procurement for the OpenHydro project, a naval architecture and marine engineering firm based in Dartmouth was awarded a contract to design the barge which deploy the tidal turbines.

The installation of the 4 MW tidal array is a key step toward the Province of Nova Scotia achieving its goal of producing 300 MW of power, or 10% of its current power supply, from in-stream tidal energy projects.